The sixth book published by Mary Stewart is The Ivy Tree so this is the subject of my sixth book art post. I have shown a few of my Ivy book covers before now, for example in More About The Ivy Tree: Some Book Art but today I thought we could take a look at all of them in one post. As ever, I am looking at my own copies of The Ivy Tree so they are almost all British editions. I am endlessly fascinated by the ways in which Mary Stewart titles were illustrated over time, from the dull to the sublime with some so-bad-they’re-good-or-wait-are-they-just-bad examples. Here we go!

The Ivy Tree in Woman’s Journal, 1961. Illustrated by Andrew Robb

Prior to book publication, The Ivy Tree was serialised in Woman’s Journal, a Fleetway magazine, between June and September 1961. In the magazine, the story is renamed The Master of Whitescar and the illustrator is Andrew Robb, who I believe was this fashion illustrator for the Daily Express newspaper. I think the illustrations are marvellously atmospheric – and he certainly conveyed Con’s good looks, as well as a sense of danger.

This novel is illustrated by a photograph of ivy on a plain background and I am not quite sure what to make of it – dull with an eccentric font? The cover art reflects the book title and I suppose after reading the novel we can ponder on who or what the parasitic ivy represents. And at least the cover art doesn’t aim squarely at a female-only market – Mary Stewart was no fan of covers that served to restrict her readership to women only.

Just as with the Woman’s Journal serial, the Reader’s Digest abridges Mary Stewart’s writing. So I own these copies of The Ivy Tree partly from a collector’s compulsion but mainly for the joy of seeing her works illustrated. Walter Myles, like Andrew Robb above, has made a fine job of evoking the tensions within the novel. The condensed book has nine gorgeous illustrations, some in sepia tones and others in vivid blue-greens. There is also a page about the author in which we learn that Mary Stewart ‘is, like her novels, attractive, amusing and forthright in her views’.

Here our heroine looks like a private eye in a trench coat, hiding behind an ivy-choked tree trunk. And, rightfully, Mary/Annabel is blonde, as described in the book (whereas in the Woman’s Journal serial we are told she is dark-haired).

By 1968 (5th impression), we have retained the trench coat and tree trunk but night has fallen and Annabel looks rather different. Personally I prefer this cover although I miss the horse.

Same year, different impression – we have moved on to the sixth paperback impression. It is good to see Hadrian’s Wall here, given the importance of setting in Mary Stewart novels. But now our heroine’s hair colour has changed once again, and I’m not even sure if we have a trench coat any more or if it is a yellow dress. And are we seeing a baby pink hat or scarf or…? Whatever it is, it seems very random – could our heroine have been holding a horse-brush but the horse did not make the final illustration?

Three ‘complete books’ by Nelson Doubleday, this omnibus contains This Rough Magic and Wildfire at Midnight as well as The Ivy Tree. I confess to being swoonily in love with this cover: a great title; a huge and dark old house looming in the background; and an imperilled heroine running for her life, in what is surely a tench coat, through fields and hills of long purple grasses (that conveniently hide whether she is having to run in heels) – fabulous work, Mr Mott!

Coronet’s 1970s Mary Stewart book cover series is iconic but this must be my least favourite example. The burned-down building is well sketched but oh! the awful 70s fashion that we are subjected to: the collar on our heroine’s dress makes me wonder whether she is under attack by a gull while his collar and tie are horribly dated. And is his face so much paler than his neck because of strong emotion, pale smoke from the fire or is he channelling 70s icons like David Bowie by wearing make-up? All of these questions could have been avoided by foregrounding and enlarging that ivy tree.

This Octopus/Heinemann edition is in my opinion for collectors only. Containing four novels that are complete and unabridged, this book comes in at a heavy and unwieldy 816 pages long.

These audio cassette tapes run to over 12 hours, and the narrator is English actress Jane Asher. I do like how the lightning and the dead branches of the ivy-choked tree reflect one another but I am less keen on the oversimplified lines and colour of the building.

I very much like this book cover: it hints at mystery and tragedy in the story, yet looks like somewhere you would be drawn to explore and find out more about. I think it benefits from not showing any of the characters, since clothing styles date books *tries to to avoid giving the side eye to the 1970s Coronet cover above*.

Okay, so this cover uses the same illustration as the book above (in the 1988 edition, the white gate is on the back cover, and on that back cover you can clearly read that the gate is inscribed Whitescar) and this time we are given the illustrator name: Gavin Rowe. I don’t really understand the blocks of green on this cover compared to the full illustration on the previous one but I suppose it has some kind of branding purpose. The previous cover looks far better, in my opinion.

I am not a fan of the 2011 covers set, but this may be my favourite of them, mainly because there are no sickly shades of pink, blue or yellow to offend me. I like too that I am reminded of Little Red Riding Hood, not that that relates to the novel. And as I have stated before, I heartily approve the message that what we have here is A MARY STEWART MODERN CLASSIC. Can’t argue with that!

This cover again confirms for me that I simply adore the 2017 book set, with its claim THE BELOVED MODERN CLASSIC, its clean and clear font, and its beautiful vintage illustration. I feel that this set does justice to the elegant perfection of Mary Stewart’s writing.

That is everything in my collection but there are also the US covers that Jerri kindly shared with us here. Here again is the atmospheric Charles Geer cover for The Ivy Tree:

Do please get in touch to let me know what you think of these The Ivy Tree covers – which is your favourite? 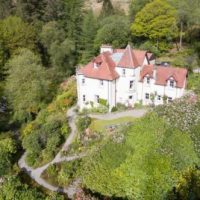 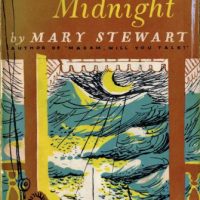