The novel is narrated by Christy (short for Christabel) Mansel, an English girl of 22 who has lived in Los Angeles since her parents moved there four years previously. She has been working for a commercial television station for the last three years but it is clear that she has had no financial need to do so as her family is extremely rich. Christy confesses to having a ‘”spoiled” quality… the result of having too much too young’.

The novel opens with Christy meeting her cousin Charles in Damascus: she is on a holiday package tour that she has tailored to her wishes; he is touring around improving his Arabic after graduating from Oxford, as preparation for going to work ‘in one of the family’s Continental banks’ in Beirut. Charles must be of an age with Christy as it appears they were mistaken for twins when young. Their resemblance is not too surprising, since their fathers are identical twins. And Christy talks of him as ‘Charles, my cousin – my “twin”‘. Disquietingly, all the signs from early on in the novel point to them falling in love – is the author playing on Gothic tropes to match the crumbling palace the characters will visit? I don’t know the answer.

The book’s plot centres on Charles and Christy’s Great-Aunt Harriet Boyd, a widow who moved to the Adonis Valley near Beirut some fifteen years previously (to inhabit the crumbling palace mentioned above). She has modelled herself on the real-life Lady Hester Stanhope (1776-1839) whom Mary Stewart mentions within the novel and in her Author’s Note that precedes the story – Lady Hester and the Adonis Valley seem to be the major inspirations for the novel. Like Lady Hester, ‘Lady’ Harriet is a forceful, eccentric character who leaves England behind to adopt male Eastern dress and unconventional habits, casting off her family in the process. Learning that Great-Aunt Harriet lives nearby, Charles and Christy resolve to visit so that they can let the rest of the family know how the elderly lady is keeping.

When Christy decides on impulse to go on to the palace of Dar Ibrahim ahead of Charles, in the company of a charming young driver named Hamid, the book takes on a darker tone, and there is mystery, unease and suspicion. I don’t want to give away the plot but rest assured that there is danger, wrong-doing, crime and suspense in abundance, as well as Mary Stewart’s extraordinary writing that brings the setting and characters alive.

So here, treading on the ghostly heels of Isis and Ishtar and Astarte and the Great Mother herself who was Demeter and Dia and Cybele of the towers, came Aphrodite to fall in love with the Syrian shepherd Adonis, and lie with him among the flowers. And here the wild boar killed him, and where his blood splashed, anemones grew, and to this day every spring the waters of the Adonis run red right down to the sea. Now the corrie is empty except for the black goats sleeping in the sun on the ruined floor of Aphrodite’s temple, and against the roar of the torrent the drowsy stirrings of the goat bells come sharp and clear. The rags that flutter from the sacred tree are tied there as petitions to the last and latest Lady of the place, Mary.

Even without the legends, it would have been stunning. With them, the scene of white water and blazing rock, massive ruins, and bright flowers blowing in the wind from the fall, was something out of this world. 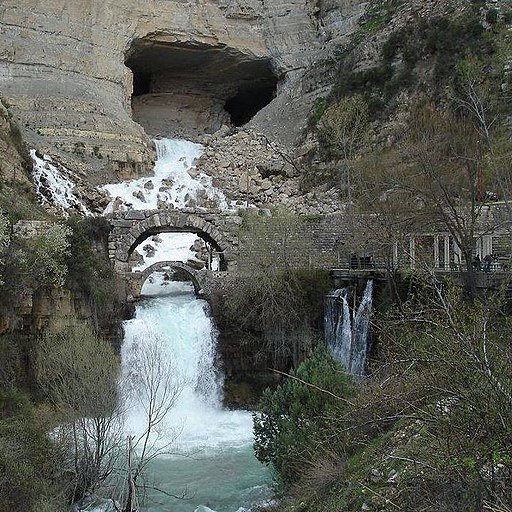 I met him in the street called Straight.

9 thoughts on “The Gabriel Hounds”